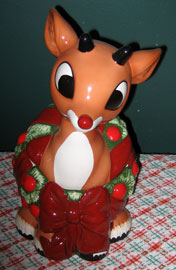 If you have read my blog for any length of time, I'm sure you have seen this picture before.  It is a cookie jar based on the character of Rudolph the Red-Nosed Reindeer as portrayed in the Rankin-Bass 1964 TV program.  To say I LOVE that TV show would be an understatement!

Anyway, at one point, the Lenox company manufactured several products related to that show as Christmas decorations, and The Tim gave this one to me for our anniversary.  Since then, it has always been one of my very favorite Christmas decorations, and held pride of place on the dining room table.  Every time I would see it, I'd smile, and it was always one of the very first things unpacked, since it was easily identifiable in its own box.

Rudolph survived so much - moving, being stored in the basement much of the year, various visits from children, and investigations from cats, just to name a few.

Then the Koodle joined the family.

Things were OK the first year, since he was busy with other decorations and ornaments.  Surprisingly, he didn't break anything, he was just a normal, curious kitten.  But last year, he decided that dashing across the dining room table was a faster way to get to any other cat he was chasing.  Apparently, he tried to stop quickly one day (The Tim was home when this happened, and this is his version of the story), and the tablecloth moved, and Rudolph fell onto the wood floor.  And that was that.

I know that in the grand scheme of things, this is not a tragedy.  But it still broke - and breaks - my heart.  The Tim always says that I get way too attached to things, and I probably do, but I'm not likely to suddenly change at this point in my life and not care any more.  And this decoration was more than a "thing" to me.  So earlier in the week, when he brought up the boxes of Christmas stuff from the basement, I kept looking for Rudolph's box, and then remembered what had happened.

I just hope anyone who does spend that money on one really really loves it.

And I hope that this year, there will not be a repeat of the Koodle Christmas Story.

Such is life when a Koodle is involved, I guess ...

The good news is that Christmastime is well underway, so it's much easier to be happy than sad!
Posted by Bridget at 9:16 AM
Labels: Christmastime, koodle, Rudolph

I know the feeling --- Giroux has done something similar.

All may not be lost though. I would keep an eye on thrift stores and second hand shops. Sometimes people don't know what they have and donate them.

I found a "Nauga" toy at a garage sale for 25¢. I was a good guy and told the lady how collectible it was and that it was worth a LOT of money. I don't know if she pulled it out of the sale, but I couldn't take advantage of her (nor did I want a Nauga toy).

Bridget- Since it is the 50th anniversary of the show, maybe there will be some Rudolph things out that you haven't seen before.

My daughter got a large stuffed Clarice for 20.00 this year.

I know how you feel, I am like that too.

I feel your pain, although mine, to date, is human-, rather than pet-induced. My great-grandparents worked with glass and ceramics (as well as yarn and fabric), so all of us have been very lucky to own various pieces of theirs, the Christmas ones being the most valued. But inevitably lids are tricky things, and the Santa Claus candy jar, the Christmas cottage cookie jar, and the Christmas tree cookie jar have all been damaged beyond repair. I have a memory of desperately making lunging juggling motions attempting to grab hold of one lid that slipped through someone else's fingers. It would have made hilariously painful film footage as I must have touched the darn thing at least thrice before it hit the kitchen tile.

I love me some Rudolph. It doesn't really feel like Christmas without a viewing or a reference or something. I'm sorry Koodle whacked your Rudolph. I hope that one finds its way back to you, because it's obvious you will love it twice as much if you had another. Wishing you Merry.

My daughter has been chiding me lately for being attached to "things," but I am attached to some -- and I completely understand how you feel about Rudolph. Of course Koodle is more important than a "thing," but that doesn't mean you haven't experienced a loss.

Maybe Santa will splurge on you this year?

I looked all over the place trying to find one I could buy for you. You know I love you, but, right now, I can't squeeze that out of my budget.

Two years ago I broke the ceramic turkey my late mom made for me ages ago. I can't even blame the cat. I just dropped it on the floor as I was putting it away. I know just how you feel-and it feels awful.

I get terribly attached to things so I totally understand.
The one that breaks my heart the most is a little brooch I had. My great aunt was a pack-rat, and when she died, my grandmother gave me all her costume jewellry (it was like a pirates treasure trove for seven year old me). As I grew up, I sold some of the more valuable pieces, and shared some among friends, but there were a few I just couldn't bear to part with. One was a little brooch of a highlander. Most of it was enamelled metal, but his face was a pink shell. Anyway, on my first date with Dave, I had my little scotsman pinned on my sarong skirt - I used safety pins to hold the skirt closed, and he was just added on as decoration. How I wish I hadn't used the safety pins, because at least them I would have noticed when he fell off (despite the fact i would have lost half my skirt).
Our date was at the zoo and we'd spent all day walking through the whole place - I have no idea when/where I lost it. My only hope is that someone picked him up and gave him a new home.

How could you have not been attached to that? I mean Rudolf is a classic in any form. I get attached to things too, but that is what makes us good at making a home that is warm and comfortable. By the way I made my husband and Little Buddy watch Rudolf a few nights ago, I was talking along with the show almost word for word, I love it.
Meredith

It's so nice that all of you understand (and can commiserate? Well, that's not "nice" you know what I mean)! And Kim, OMG, don't worry about it! I don't have the budget or I would have snapped up one of those available - but oh what a lovely thought.

You guys are the best. Other people just don't "get" it.

And Meredith - I can pretty much recite the show too. :-)