The Big Reveal of a Finally Finished Object

Hello all!  I do hope you have done your civic duty and voted today.  I was voter #7 at my polling place.  I was talking to one of the workers, recalling how last year at this time, I was at the polls when they opened, like I was today, but there was already a line down the block and around the corner, and I was voter #100-something.  She said, "Ah yes. Back when we were all so hopeful."

But remember, all politics is local.  If you don't vote - nothing will ever change.  Ever.

Citizenship lecture ended.  On to the knitting.

Over the years (yes, years!) I have talked about my Custom Fit sweater.  Either that I was knitting it, that I was going to knit it, and/or how I wanted to finish it.

October 2014 - I took a class teaching the Custom Fit method of knitting a sweater, created by Amy Herzog, at Loop here in Philadelphia.  I was extremely excited to take the class, and to see how the sweater would turn out.  Not ever having knit a sweater that really looked that good on me, I wanted to see if it was possible (two previous attempts had been questionable at best).  I purposely purchased inexpensive yarn, so that if things went downhill, I would not have invested a fortune in this project.

Zoom!  I was off!  I had the front knit pretty quickly.  But instead of starting the back right then, I put the whole thing aside to work on Christmas gifts.  I picked it up again and knit approximately 1/2 of the back, when I got to a part of the pattern where I was supposed to have gradually decreased to x number of stitches long ago, but I had many, many more.

For a few weeks, I frogged 2-3 rows at a time, until I got to the point where I should have started the decreases.

Then I put it down because probably something shiny grabbed my attention, or it was Christmastime again, or I wanted pie.  Or really anything else.  Or all of the above.

Eventually, I realized that the sweater was a) still someplace with all of my knitting stuff, and b) still waiting to be finished.  I found it, and would have gotten going again, but ... the Koodle had revenge peed on the project bag.  And the pages of the pattern.  But amazingly, not on the yarn or sweater pieces!  The project bag was laundered, the pages photocopied, and I was ready to go again.

Except I couldn't find the notes letting me know where I'd left off.  I decided to measure the piece in progress, count the stitches, and then find the spot in the pattern where I *thought* I probably was.  If I started knitting again, and things were going well, I'd continue.  Otherwise, I'd rip out the whole thing and forget about the project altogether.

Well, it worked!  The back, and the two sleeves were finished in no time!

And then ... they sat for a few months.  Finally, I washed and blocked them.  Then realized I remembered nothing about how to seam pieces together.  Enter my friend Kathy, who showed me how to do it one Saturday afternoon last month.  A few weeks later, it was all put together, the ends were woven in, and all it needed was the neckline.

One Sunday I sat down with the Eagles game on TV and started to pick up stitches for the neckline.  Then I knit the neckline.  Then I started binding off.  And it looked like crap, and also would not lie flat.  So I put out a call on Facebook to my knitting friends asking about bindoffs for 1 x 1 rib.  I got a lot of suggestions, but my friend Andrea linked to a YouTube video. I watched it, and to be honest, was really confused.  But then on the right side of the screen, were other videos relating to similar topics.

And that is how I learned the Tubular Bind Off.  And that is how my sweater was FINALLY finished!  Three years to the day I cast on!  Ridiculous, but also pleasing to me in symmetry.

I give you the FO: 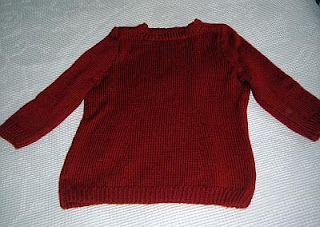 Project:  Cranberry Custom Fit Sweater
Pattern:  Custom Fit, by Amy Herzog
Yarn:  Berrocco Vintage, colorway Sour Cherry, 4 whole skeins and about 1/2 of a fifth
Needles:  US size 8
Modifications:  ARE YOU KIDDING ME????
Notes:  Most of them are in the rambling paragraphs above.  As mentioned I used the Tubular Bind Off, with a most excellent tutorial, found here. 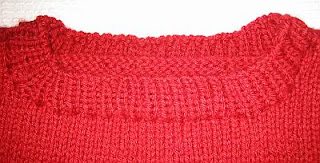 The back - you can see my seaming needs some work, but I'm fine with it how it is! 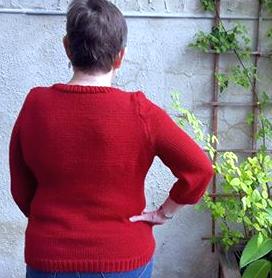 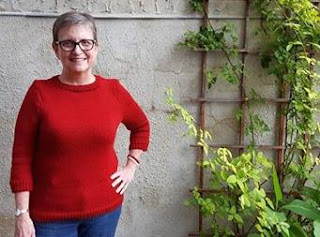 My thanks to Andrea for taking the "modeled" shots this past Sunday after we met for coffee.  :-)

What are my thoughts?  Well, I'm wearing it today, and it's super comfy.  I love the color, though I have to admit that the yarn has already started to pill.  :-(  However, I still have a finished sweater after all of this time, and it FITS, and I really like it.  I can see wearing it a lot.

Well-deserved congratulations on a gorgeous sweater that fits! You faced many daunting challenges, nevertheless, you persisted. Enjoy it (along with the knitting of your next sweater)!

Congrats Bridget! You look lovely in your custom fit sweater. What a wonderful achievement and I love the color, too. I have tried once to make a sweater and it didn't work. Maybe I will try again. I hope you're having a lovely autumn day. My best to you. Pat xx

I looks great - and fits well, which is really the hardest part of knitting a sweater!

That is one gorgeous sweater! I love the color! And, I laughed out loud at the modifications comment! Bravo for getting that done!!

Only three years to knit a sweater? Sounds great to me! ;)

And it looks good on you! Congratulations on conquering such a large mountain!

You look fabulous in that color red. Congrats on the brand new you-made sweater!

Just think .... the next time will be so much easier. You already know the mods you need to make.

Great finish!!! I took that Craftsy class and have the pattern and some red yarn even waiting for me to cast on. You give me hope!

Bravo! I'm glad you persevered. The sweater looks fabulous on you.

Well done!! Looks like a perfect fit and the color is fab!

Your sweater is fantastic! A lovely color and the fit is perfection. And you look fabulous - well done!

Bridget- Looks fab on you- you must begin another one.

What a saga! By the time I got to the end, I felt almost as Joyful as you did.
Wonderful news and lovely sweater. (No thanks to Milo The Koodle...!)

Well done! It looks fantastic on you.

I never realized you didn't knit many sweaters. That one is wonderful!

That is lovely! And you should knit another one!