I don't know about you, but my weekend went by much more quickly than I think it should have.  It was Friday evening, and then suddenly ZIP it's Monday morning, and the alarm is waking me up.  Dear Diary:  WHYYYY???

It was a good weekend - not busy at all, and not incredibly productive, other than in my knitting.  The weather was very nice both days - Saturday was warm and sunny, and Sunday was cooler with sun in and out all day.  Saturday morning, The Tim and I went to a Lowe's near our house, because he wanted to get some tomato and herb plants.  We were successful with that, and we also got a rosebush to plant to replace the one that died a couple of years ago.  I hope this one "takes" - I loved the pretty roses right outside the door!  Fingers crossed.

But mostly all weekend, I worked on this: 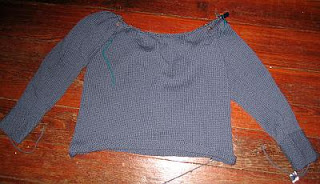 As you may remember, I was working away knitting the sleeves most recently.  Well, they were both completed, and it was time to introduce them to the body of the sweater.  Keep in mind, this is the first time I've ever made a sweater that is constructed this way, so there was a lot of hope involved.  And from what I can tell, the operation was a success, so that's good.  I worked in this over the course of two movies ("The Space Between Us" [stupid], and "Suburbicon," [OK but much darker than I was expecting]).  By the end of the day on Saturday, I had both attached the sleeves and added some inches beyond that.  And I was pleased with how it was going.

However, on Sunday, it occurred to me that warmer weather was coming, and that meant I needed to decide how to proceed.  You see, I want to finish it because I want it to turn out and be wearable.  BUT - at the moment, it's really heavy to knit with all of the pieces joined, and could be quite uncomfortable for knitting if the weather is warmer.  So my choices were to a) try to finish it sooner rather than later, or b) let it languish until the fall.  OK, so I included the "b" option because it did briefly occur to me, but I wanted to go with "a" from the get-go.  Why?  Because it's so close to being finished at this point!  And it would be more fun for me to be able to pull it out next fall and think, "Well, I can just wear this right now," instead of still having to finish knitting it.

Which is reasonable and also makes sense.  Except that now finishing this sweater is ALL I can think about.  And it's not necessarily "hard," but I am at the point where there are both cables and decreases, so I need to pay attention to avoid having to rip back all of the time.  So for instance, this morning, I had to tell myself not to pull it all out for the 15 minutes I had to knit - because by the time I pulled it out, got the pattern set out and was ready to start, the 15 minutes would be over!  I'm already thinking about whether or not I'll have any time to work on it this evening, and any other evening this week.  And frankly, I have other stuff I should do!  But I am borderline obsessed now with finishing it.  I just hope that other than the few too-warm days we're supposed to have this week, that spring will both arrive and stay for a bit so I can get it done.

Plus, who knows if I'll see something shiny and become completely distracted???  It could happen, you know ...
Posted by Bridget at 8:13 AM
Labels: knitting, weekends, wips

I am with you on that indecision!

It's pretty clear that you want (or maybe need!) to finish this sweater. Go for it and 85 degree temperatures be damned!

Good for you! I find whenever I am close to finishing something my interest disappears and it goes in time out. I'm rooting for you to get it done.

Keep your eye on the prize --- a brand new sweater to wear on that first crisp day next fall.

Now that the weather is getting nicer, we'll have to plan a day together.

You're so close to being finished now! Go for it! :-) Each row will get shorter and shorter . . . and soon. . . you'll have a great sweater. All ready for fall!

Good luck! You can do it!

Oh I think you'll finish it!! and fast

You are nearly there, so just keep knitting. You'll love wearing it in the Fall.

Oh, I hope you do finish. I am very curious about this style of construction. I admit I don’t understand why a designer would choose bottom-up on a raglan, so I am very interested to see what you think of the result. There are a number of patterns I like the look of but have avoided because of this. Maybe I should rethink!