Most of our Christmas decorations and ornaments on our tree have a special meaning to us - we can tell you where we got them, who gave them to us, etc.  Since today is Three on Thursday, I have decided to share three things are are "especially special" to us. 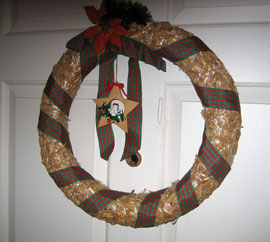 This is one of the very first Christmas decorations we ever had as a couple.  When The Tim was in graduate school at Notre Dame, and we lived in married student housing, we had a small apartment and the door was in an enclosed hallway.  We wanted a wreath or some kind of decoration for the door, but couldn't really afford to buy one.  A fellow student of his suggested we do what she did and make one using materials from a local craft store.  Success!  This has traveled from apartment to apartment with us, and now to our house, where it hangs inside the front door.  Every year, I expect that I will pull it out of the package and it will be a mess, but it's hung in now since the Christmas of 1978.


This Rudolph and Santa: 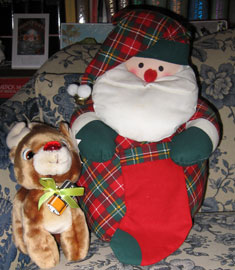 (OK so this is two things, but they are ALWAYS together!)  The little stuffed Rudolph was a promotion from Duracell back in 1984 or 1985 - you sent in proof of purchase, and they sent you this stuffed toy, and he had a Duracell battery in his nose - when you press his one ear, the nose lights up!  I have to give them credit, it lit up until 2 years ago, so it did last a good long time.  (You can't replace it without tearing him apart, so we are living with a non-glowing Rudolph now.)

The stuffed Santa is from a kit bought at JoAnn Fabrics the first year we lived in Philadelphia, which was 1991.  I had gone to look for fabric to make stockings for the kitties and though I didn't find that, I did find this kit.  It was simple to sew together, and like so many of our decorations, manages to look just as good from year to year.  Our cat Hannah used to love the jingle bell on the end of Santa's cap, and would sleep next to these two on the couch for most of Christmastime. 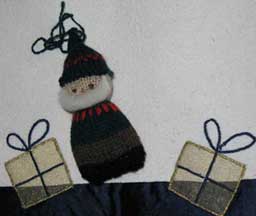 I knitted this tiny guy (well, actually I knit two - the one above was for a swap, and then I knitted one for us) from a kit probably at least 15 years ago.  He hangs on our tree every year, and always seems just as happy to be there as we are to see him.  I am always amazed that I was able to successfully make two of these that turned out to look like they were supposed to look, since I was a fairly new - and not overly confident - knitter at the time.

What about you - do you have any holiday items that are "especially special?"  Or, alternatively - any that you keep, but you don't really know why??
Posted by Bridget at 9:13 AM
Labels: Blogmas-2018, Christmas-decorations, Christmas-ornaments, Christmastime, three-on-thursday

These are especially special! I know a woman who decorates a "theme tree" every year - Christmas in Venice, The Joy of Blue and Silver, or Holidays Around the World. The first time I saw one, I asked if she had a separate tree for all the family ornaments - things that she had made, that her kids gave her, or that meant something to her. She replied "Oh, that junk? I just throw it away." I can't even imagine, and am glad to see yours!

Love all your stories!
I can't believe your wreath is older than me! I was just thinking my polar bear swag on the front door needs a refresh - and it's only 22 years old!
Like you, most of our ornaments have meaning. The most special is a little wooden angel on a rocking horse that hangs on our tree. It was made by my Grade 1 teacher's (Mrs Ireland) husband. All the girls in the class got an angel, all the boys got a drummer boy/nutcracker type ornament. Mom made sure it came with me when I moved out on my own. It has hung on the tree every since I got it.

Ahhh, nice stories Bridget. We have a number of ornaments that mean something to us - some from Colin's school days...some from when I was a kid. Always fun to open the ornament boxes each year and re-discover them.

I have a shoe box full of ornaments that my grandmother made before and during the Depression. Some of them are in pretty rough shape now and some are still pristine and they are very special to me. The family knows that no one touches those ornaments but me. I hang them on the tree and I take them back off. The ornaments the kids made when they were little are special too, but they insist on hanging those on the tree themselves.

I've apparently passed the 'special ornament' tradition on to the kids. I make them an ornament each year and the kids seem to treasure them, even when they are just a different colored version of the previous year's ornament. Makes me a very proud mamma!

For years I've hunted for special ornaments for my nieces and nephew. There is such variety and now that they're adults, they're decorating their own trees.

We have two that are very special ---- Steve has a plastic light-up church that used to be a part of their train set when he was a kid. If you wind it up it plays Silent Night. It has a place of honor in our house.

The other is mine . . . a little burlap Santa that my mom bought. Barbara got a white one with gold trip. Mine is red burlap with rustic fringe. He must be about 45 years old now and he almost got stolen. I put him on a wreath when we lived in Orlando. When it was time to pack away the Christmas stuff we noticed someone had stolen the wreath off our front door. I was heartbroken that they got away with my Santa .... only they hadn't. A few days later when we were outside we found HIM under one of the bushes. He stays safely inside now. Sometimes he is a tree topper and sometimes he just sits on a shelf.

I love this post!
If you come into my house and find the most ratty, cheesy holiday items you can bet those have the most meaning. Some are so fragile now that they never come out anymore which makes me sad. I also have a Christmas card collection where I have one of all the cards I've ever sent since I was first out on my own. This year in particular it pains me to see those precious mementos so I'm ignoring their existence-but I'm still glad they are there.

I love your Woodsman!!
Great questions. i love my Santa kneeling by baby Jesus ornament.
I keep tablecloths that no longer fit our tables and I have NO IDEA why!!!!!