Have you ever had a day at work when, in spite of your own efforts, you can hardly get anything accomplished?  That was my day today.  And it was completely out of my control, as it was one of those days when except for about 1 1/2 hours total, I had to go to meetings.  Ugh.  I think instead of management types going on and on about teamwork, fundraising, and "getting to one" (that one makes me especially stabby), *they* should all have to attend workshops about how to run efficient meetings, and they should not be able to call a meeting until they have proven they can do it well.

In my working life, I have had only two supervisors who knew how to run a meeting. They stuck to the agenda (first of all, they had an agenda!), said what they wanted to say, left time for discussion/Q&A, and then called it quits.  Two.  Out of many, trust me.

This sums up today. 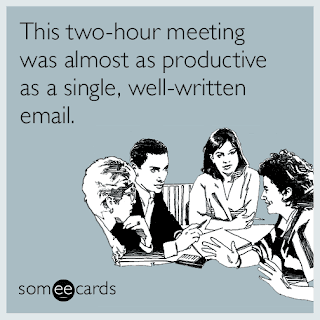 On top of everything else, we learned that there will in fact be a holiday party this year for the staff.  In the past, this has been one of the few nice things that management does for us. There's usually really nice (and tasty) food, nice music, and people enjoy it.  It's generally one evening after work and is over by 8 p.m., so people can get home before midnight (well, most people if you know what I mean ...).   Most years, it's in early or mid-December, so when nothing had been said about it, we assumed the new regime had decided not to do it.  Then today it was announced that there would be a party, later in the month - and it is pot luck.  Now, I have nothing against pot luck when I'm getting together with a few friends that I know well.  But pot luck for 125 people?  Apparently it is a cost-cutting measure.  I'm guessing it will cost less, since fewer people will show up.  A lot of people have fairly long commutes, and I can't see them finding it convenient to bring a pot luck dish with them.  Also, I'm not sure where things can be heated up, which adds another layer.   I think I'll skip it this year, because the timing is especially awful, and I don't feel like trying to carry a huge dish/pot/bag/whatever of food from home to work.  Maybe they are counting on it being a bust, so they can just skip it next year?  Who knows.

Yep, been there too many times to count.

I'm surprised at the number of leaders of civic organizations have no idea how to lead a meeting. Most obviously think it magically happens.

Oh I feel you on the meetings. I work with Sales, and they are TERRIBLE at meetings.
They also have to call me to "discuss" things that can easily be answered in an email. My job requires long stretches of concentration and work, and frequent calls for stupid crap really bite into my productivity.
Our company used to do a decent Christmas celebration... then a couple of years they couldn't get it organized in time, so they used the $$ in spring and summer, but made them "team building exercises" (Which I hate as much as useless meetings.
Now they do the potluck thing during working hours. Needless to say, people aren't overly invested in it.

So sorry to hear of your office party disappointment. Your new management sounds like a bunch of party poopers.

Oh yuck! I hate meetings (trying to stay awake) and like Val any team building event makes me cringe. /sorry the holiday party is a bust this year.

Pot luck for 125?! That is almost funny and I kind of wish you were going (not really) so we could hear just how badly it turned out!

Oy. I remember a year when there was a "Christmas Pot Luck" for those of us who schlepped in our crock pots filled with 117 different kinds of meatballs - imagine our surprise when all those crockpots plugged in shorted out the electricity! LOL

Epic fail... such an epic fail!

I think you made the right decision.

Office pot lucks... The last one I attended, we had a cake, a box of donuts and 12 bags of corn chips and jars of salsa. We obviously did not have a pre-party meeting. :)