The Name Alone Could Make You Sick

Does your family have any recipes/dishes/treats that are constant additions to holiday meals?  I mean, those specific to your family, not overall traditional holiday foods.

I was thinking of this earlier today, as last night The Tim mentioned a well-known family favorite, and wondered if any of his siblings made it as part of their Christmas dinner dessert.  I was first exposed to this "delicacy" the first year we were married, and had left my family's house to go have Christmas dinner with his.  All of his siblings were going to be there, and his Aunt Betty was bringing the much-anticipated dessert.

The contents are (and no, I do not know the specific measurements because I don't ever want to know):

Now, don't get me wrong, with the exceptions of raisins and chocolate chips, I've known and eaten many versions of jello with some of these individual add-ons.  My mother was especially fond of bananas in jello, though never grape jello.  Anyway, this dish is put together in a very specific way, with the order of ingredients also specific (again, I do not have that information, but I can tell you that the Cool Whip goes on top), and put into a rectangular cake pan to set and then serve as the piece-de-resistance on Christmas Day.

I try to be adventurous with food, and like to try new things.  But I just could not bring myself to even take a taste of this concoction, because it was a) *very* purple, and b) very ugly, and c) IT IS CALLED "SLUMGUM."

Did you hear me there???? It's called SLUMGUM.

Which begs the question of why something, especially a "dessert," has a name that makes it sound like it was scraped off a dirty sidewalk?  The Tim has no explanation for this, other than that's what they have always called it.  I remember at the Christmas dinner referenced above, his oldest niece, who was about 2 years old at the time, and visiting from California with her parents, said to her mother, "Do you see that purple stuff there?  Don't eat it, it's really yucky."  Fortunately everyone laughed, because I found it hilarious.

Anyway, as I was writing this post, I decided to search Google Images for "slumgum."  Most of the images had to do with beeswax, a few were macaroni and beef concoctions, but oddly enough, none of them included anything related to grape jello and additional ingredients ...

Here is one of the photos related to beeswax 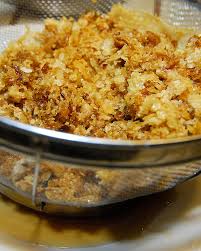 Trust me, this looks way better than what I'm talking about!
Posted by Bridget at 3:13 PM
Labels: blogmas, holiday-foods

The Tim might never admit it, but I'm wondering if decades ago someone in the family took every slightly disgusting Jello salad recipe and combined them into one grand and glorious mixture? Our family has a lime Jello and banana combination that while not good, isn't nearly as bad as slumgum. Does anyone in his family actually like this stuff, or just make it because of tradition? Thanks for sharing this equally repulsive and hilarious recipe!

I found this short reference to how "slumgullion" came to be associated with food: https://books.google.com/books?id=1I6HCwAAQBAJ&pg=PT92&lpg=PT92&dq=jello+slumgullion&source=bl&ots=WMpImhKyd9&sig=Kd0NZuouU1YYRdY-aidcZLeGTq0&hl=en&sa=X&ved=2ahUKEwjNwMKf86zfAhXyzVkKHaxgB7kQ6AEwFXoECAcQAQ#v=onepage&q=jello%20slumgullion&f=false

I have never heard of such a thing either! Although I do have an aunt who mixed cool whip, lime jello powder, and crushed pineapple - and yes, us kids devoured this insanely sweet concoction!

This is so crazy....The Mister and I were just talking about a family dish his mother used to make that I had never heard of. He wants me to make it and I had to look it up. It's called....slumgullien. It is a macaroni and beef stew and it sounds terrible to me but according to him it's the best thing ever. Ever weirder is that I was watching a very old Christmas movie on TCM the other night and they were making a big pot of.....slumgullien!
What are the chances? This is just so weird....

That beats pretzel salad for sure.

Wow, that's a new one to me, and I've tasted a LOT of jello-based desserts.

Yeah, that the Cool Whip goes on top is about the extent of my culinary knowledge.