A Day Off and An Announcement

Hello and Happy Friday!  The administration at work decided last year that Juneteenth would be a holiday for us, and since it actually falls tomorrow, we have the day off today.  As a result, I decided this was the appropriate thing for me to wear for my Shirt of the Day. 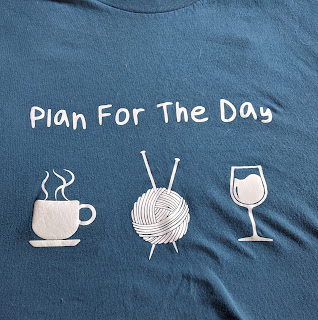 Because, yes, I am also doing laundry, will be taking Hamlet for some walks, etc., but today is all my own, so the bulk of the day will be a version of these three activities, with maybe some reading thrown in.  (I mean, I'm only on my first cup of tea right now, so I have to keep up ...)
(BTW, if you are interested in your own shirt announcing your plan, I got this one here.)
It's a really lovely day here in Philadelphia, so I want to take advantage of some nice walks with our boy, since tomorrow and Sunday the heat and humidity are supposed to be a lot worse.  Not necessarily even close to what some parts of the country are experiencing, but you know me - the warmer the weather, the less I want to deal with anything.
Which reminds me, I don't necessarily spend a lot of time looking at Twitter, but the other day, someone posted that he was not a fan of summer, and decided that for a lot of people, they liked it due to conditioning from an early age, when summer meant three months of no school.  There were some funny responses, both agreeing with him and disagreeing, and so I posted this response:
"Summer is the worst as far as I'm concerned. The heat and humidity make it hard to live and to breathe, the mosquitoes are everywhere, and everyone expects you to act like unicorns are everywhere with glitter coming out of their butts."
And I had to laugh the next time I checked Twitter, because there were so many people who agreed with me! The original poster even said, "Yes, so true.  And besides everyone knows that unicorns only have glitter coming out of their butts in autumn."  😂
Moving along to the announcement mentioned in the title of this post.  It occurred to me the other day, that June was already halfway through the month, and so I started thinking ahead to Christmas in July!  And yes, I'm bringing it back again this year, because even if none of you care, I enjoy it so much, and let's face it, this is my blog.  Anyway, this year there will be one thing that is different - instead of only a prize for each week in July, there will also be an overall grand prize, so to speak.  I'm not sure yet how I'll work it, but be assured that I'll let you know before the month begins.  I had originally planned to do something like this last year, but then couldn't remember where I put the item that was the "grand prize," which is never helpful, you know?  I came across it about a month later, in a bag marked "Christmas in July," which should have tipped me off in the first place, but anyway, it will happen for sure this year - especially since I have set the item out with my WIPs where I see it all of the time.
I probably should have marked the bag "Cookies" and I would have known where it was at all times ...
And finally, I leave you with a joke the little kid down the street told me yesterday:
Q: What did the flower say to the other flower when it was running out of room to grow?
A: Move over, bud.
Not bad for a six-year-old, right?
I hope you have a lovely weekend doing whatever your Plan for the Day includes.
Posted by Bridget at 10:17 AM
Labels: fridays, holidays, prizes, weekends

I love the shirt, enjoy your day off! :)

I only like summer because the days are so long. I love it staying light until 9:00! Here in Texas no one goes outside in the daytime in summer, and I am allergic to a lot of things anyway, so it's really just for the light coming in the windows, but I like that part a lot.

I HATE summer. It has been gorgeous this week. If it would stay like this I would love it but soon the AC will be on, the dehumidifiers will be blasting away and I'll be locked in the house away from the skeeters. It will be too hot to take Pup out on the boardwalk and the tourists will be all over the place annoying everyone. Summer lovers can have it. Give me the cold, dead winter anytime. It suits me.

Oh Sorry Bridget....I LOVE LOVE LOVE summer! Im off to leave the a/chouse and head out to the heavy aired porch to knit and not get bit!

Enjoy the extra day off.

Give me a crisp autumn day any time.

I can't stand summer because here in Florida the heat and humidity are so oppressive. Right now my ears are all clogged up because it is so humid out, yuck! I can't hear at all. And my hearing is already challenged. I am all for cooler temps we get in October. Stay safe Bridget. I always miss Christmas in July because I can't read posts to the weekend, good luck.

I’m a summer lover for sure. I just feel better overall with more light. I’m cold all the time from about October through April, so just not freezing constantly makes me more comfortable. And, I don’t go outside unless I’m going to a river when it’s really hot. In Oregon, most of summer is mid eighties- perfect for everything. I’m a gardener, and the tomatoes are my favorite thing.