Because frankly, if it was not Friday, someone would have to pay.  OK, let's just admit that it would probably be The Tim.  He is the victim of so many of my "pay" days.  Because you know, making someone pay at work is frowned upon, and I don't have any kids whose lives I could ruin ... 😉
Seriously though this week has just been loooonnnng.  And annoying.  And I was done with it by late morning on Monday.
So yes, I'm glad it's Friday and the weekend is here.  But then again, not as much as usual.  That's because on Monday, I have a colonoscopy.  Which means that after breakfast tomorrow, no food until after the procedure two days later.  And of course, the vile stuff you have to drink ("now with fruit flavoring!' - puhleeze, like that's an improvement) only adds insult to injury.  Ugh.  You may wonder why I have to do a two-day prep when most people just have to deal with one day.  Well, apparently I have an extra long colon - because of course I do - and it takes longer to "clean out," and sadly sometimes even that doesn't work.  But I hope it does because I just want it all over with and to be able to eat a meal and move on.
Dear Modern Medicine -
Please do something about this dumb and disgusting prep.
Signed, Me and My Gag Reflex.
ANYWAY.  I am hoping that this means that since I will be more or less required to stay at home, that I will make significant progress on knitting, reading, and whatever other things strike my fancy.  And at least I can still have cups of tea because if that was forbidden ... well, it wouldn't be pretty.
In other, more pleasant news, the weather has been my friend this week. It's been sunny, and cool, and just perfect for being cozy at home. The nights have actually been cold, and I do love getting into bed with the covers over me.  So good!
Do you remember my nephew who was having such terrible health problems? It was determined that he needed a double hip replacement, and the first one was a couple of weeks ago.  Everything went really well, and he is already so improved, that things are looking up for him.  Which is such good news because he is a good guy and normally really active.  It's looking like it won't be long until he can not only just walk around the block without problems, but get back to golfing and hiking in the mountains.
Dear Modern Medicine -
Good job there.
Signed, Our Family.
Here's hoping that your weekend is a good one.  Feel free to overindulge on my behalf, so the universe evens out. 😊 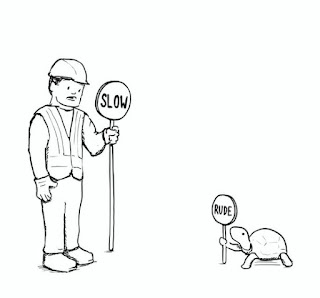 Posted by Bridget at 10:11 AM
Labels: colonoscopy, funny, medical-stuff, weekends

Oh, dear....I am sorry you have such a miserable weekend ahead of you. When I was having my gall bladder issues I was constantly having to drink one vile concoction after another so I feel your pain.

I have been visiting a hospital (not for fun) and one of the doors has a sign "I'm a Nurse. What is your Superpower?"

I think your superpower is having an extra long colon. Doesn't that make you feel better?

Oh, colonoscopy! My son is a medical researcher and I have told him that he could be a rich man if he could invent a better colonoscopy prep! But, unfortunately, that is not is "area of research"... Ugh!
Plan your reading and knitting activities for the bathroom and you should get a lot done! Hope it goes well!
I am happy for your nephew! Medical care can be amazing!

Because of course you do.

UGH! I'll be thinking of you. The prep is the worst!

Love the turtle cartoon. Too cute.

I am praying your two day prep was good enough and that all is well with you!!