Pride Goeth Before a Fall

I'm trying to keep in mind the quote in the title of this post, because I have been feeling pretty proud of myself for all that I accomplished over the weekend.  Well - over my four-day weekend, since I'd taken Thursday and Friday as time off from work.  But I managed to get the four days to count, and also do plenty of nothing, to feel like I had a lovely break from the usual work days.
Thursday was of course dedicated to The Tim's birthday, and you already heard how well that went.  Friday, I spent some of the day cleaning, which was needed.  But once I was finished, not only did I still have time left in the day to relax, but I also knew I still had two days left to enjoy.  I have to tell you, that was the best feeling!  So I decided on the things I still hoped to get done, and sort of made a plan in my brain.  I do that a lot, and 99% of the time, I do absolutely nothing about it.
Saturday morning, The Tim wanted to leave the house early and get some things of his own out of the way, so I did some laundry, and worked on switching out my shorts and sleeveless tops for sweaters and long pants.  I had started a couple of weeks ago, and just stopped, though I don't recall why ... probably because I lost interest.  It's not like I have tons of clothes to deal with, it's just that I find the whole process tedious.  Anyway, I managed to finish that, which was a true relief.  I also pulled out a few things to donate, since they either no longer fit, or I realized I haven't worn them for a long time.
Sunday morning, I *finally* got around to cleaning out the planters at the front of the house!  This particular task has been on the brain for a long time, and I decided that if I didn't do it yesterday morning, I may never ever get around to it.  It took so little time, and felt so good to finally get it out of the way, that I could only "tsk tsk" at myself for putting it off so long.
The only things I wanted to do that were left were to block the shawl I knit for my niece (so that I wouldn't be waiting until the last minute), pay a few bills, and then knit while I watched the Eagles play football.  That turned out well - though it was too gloomy of a day to successfully get a good photo of the shawl on the blocking squares, so you'll have to wait to see that.  Then, there was actually some money left after I paid the bills that were waiting, and the Eagles won their game (first home win of the season!).  To paraphrase a character from "The Simpsons" TV show, I felt like "Everything was coming  up Milhous."  😊
AND - most satisfying of all - during the game, look what I finished knitting: 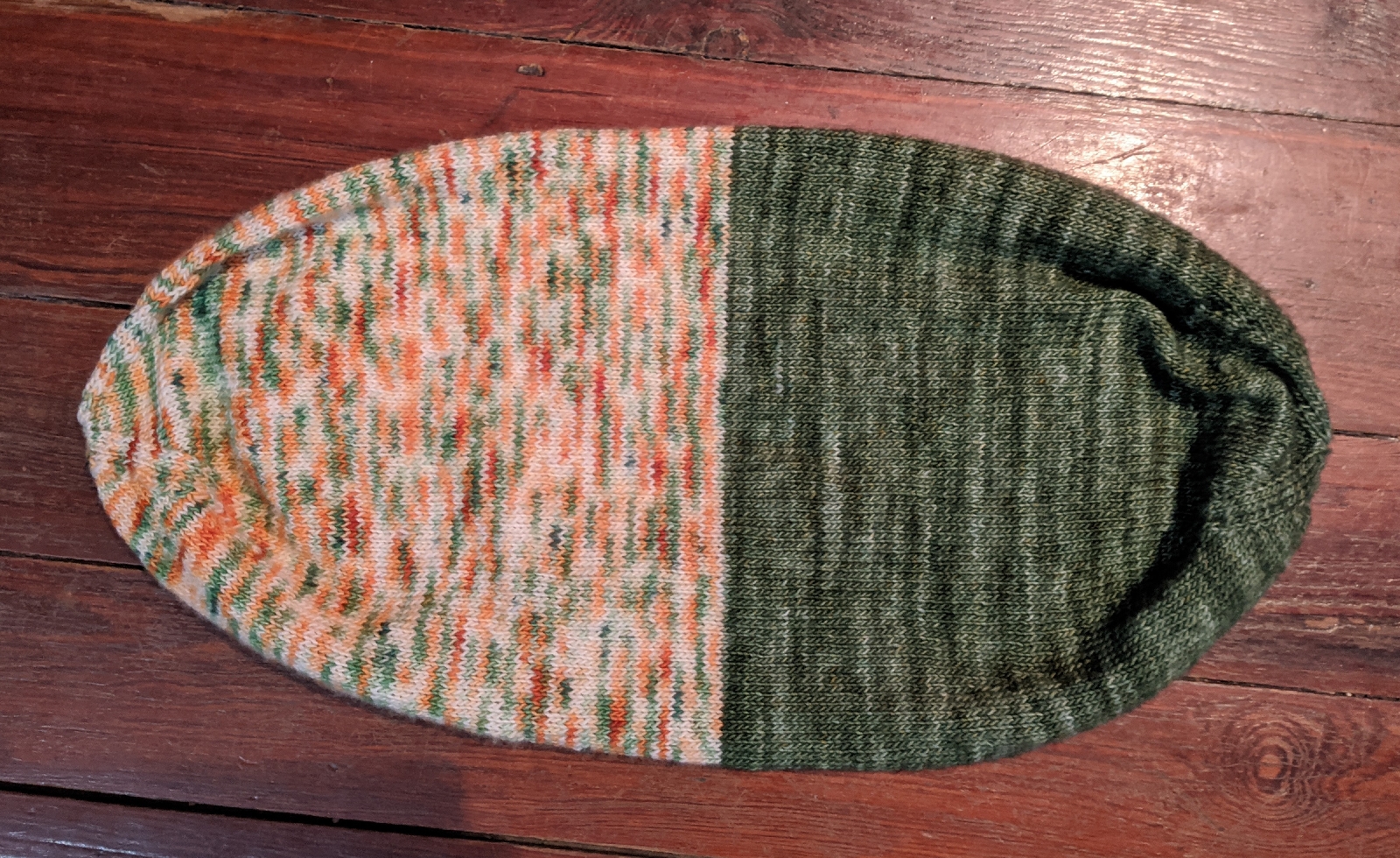 This is the Musselburgh Hat I was making for my niece's husband, and though this photo does not do the colors justice (again, it was a pretty gloomy day), I just wanted to show you how much knitting this sucker took.  I promise better photos soon, but here it is in its just-completed glory.
Today it's back to work, but only for today and tomorrow.  After today, The Tim is off until Friday, so he said he'd do the grocery store early tomorrow morning, so that we could avoid crowds at all the other times of the day.  He is also planning to bake a couple of pumpkin pies, so when I come home from work tomorrow, the house will smell sooooo good!
And that's it for now.  I hope I didn't bore you to tears, but I am just so pleased with myself for having such a productive time!  Since so often, I have lots of ideas and plans in my head which never even get started, this past four days felt like a huge win for me.
I hope your week is at least a little bit as successful.  Take care!
Posted by Bridget at 8:15 AM
Labels: 2021-knitting, fos, knitting, Thanksgiving, weekends

You were so incredibly productive over the weekend, and I didn't accomplish a darned thing. I kept thinking about it, but...nope. It was cold and rainy and gloomy and I just didn't.

That hat! It's terrific. Nicely done.

I did what some people would call "spring" cleaning. You're right. Getting things done DOES feel good.

Happy Thanksgiving to you and Tim (and of course, the fur-babies).

Congrats on all the accomplishments!

I love having weekends like that. They feel so good!
I had friend over this weekend, and we talked our faces off so my throat is sore and I'm feeling very drained. But it was a good weekend

The hat looks great! I've been wanting to make a hat like that forever, but I know all that knitting would get to me! Well done!

I'm tired just reading about all the things you did!
Lined hats take a lot of work but they are so worth it.