Fun-Times In Bill-Paying (Not)

Hello everyone - I hope you had a good weekend, and a not-completely-terrible Monday.  We had a great weekend, I'll share some photos later.  Even the weather cooperated, which made it extra nice.  I already mentioned that I took Friday and Monday off work, so yesterday was a day to catch up on laundry and pay bills, since I got paid on Friday.

Me yesterday after finishing the bills: 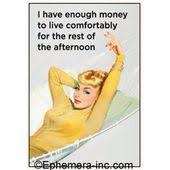 As I think I've mentioned, our house is finally paid off, as of last December, so there doesn't have to be as much juggling of funds as there used to be, which is nice.  But still, for all of the anticipation of payday, it always turns out to be anticlimatic. 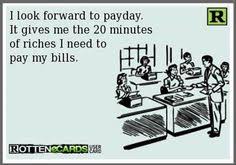 Because I apparently live in a dream world, I always think there will be more money left after I pay the bills than there is.  By the time I'm finished, I always look at the balance and say, "Oh."
However, in our house, I am the designated bill-payer.  A few years back, The Tim decided that he would take over the bills, because even though my system was "OK," he was convinced he could do it better.  Fine with me.  Well, that lasted a bit less than an entire month because he paid three bills completely that were due early in the month, and as a result, GASP!, we didn't have enough money for the bills due at the last of the month!  "You know, I think you might have figured out how it works best to pay the bills, why don't you take that chore back to be yours."
Don't get me wrong, we're not in danger of having to move into our car or anything like that.  It's just that every month, I feel like I spend so much time being conscientious, only to end up with so much less than expected at the end.  And really, it's not like we are the kind of people who spend money like we have it.  Sigh.
Maybe we need a financial advisor. 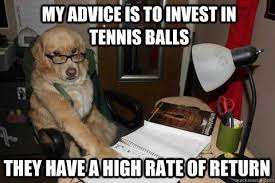 Have a good one, and if you're lucky maybe you'll find some forgotten about money in a pocket!
Posted by Bridget at 10:31 AM
Labels: paying-bills

I was the bill payer here before we retired and I was skeptical that we would make it on our pensions. I don't know how it happened but I've got more money now than I did when I worked. I see how old people end up with a load of cash to pass on. You just lose interest in spending it.

I'm the designated bill payer which means I set up the recurring accounts and check to make sure we have money in the bank to pay them!

I lucked out. I married....wait for it...a financials guy! It does help.

Rick pays the bills and I worry about the money. It all works out.

Those graphics are terrific.

I'm the Bill Payer. It works best that way. (And I love the little "memes" you included in your post. Laughter makes running out of money a little easier to bear!) XO