Walt Whitman was right - all of us contain multitudes, whether or not we think we do.  I am often surprised when people who know me well are shocked or amazed to learn something about me that I have always thought was obvious, but there you go - multitudes.

I thought I'd share a few of them today, and join in on Three on Thursday.  So here are three things that always seem to surprise people about me.

1. Last week, when we were waiting for the election results, The Tim and I were discussing some political topic, and he said, "Well, I am going to tell you what I think, based on what my favorite political analyst has said before."  Now, I have to tell you, The Tim was suddenly all about government and politics this election season, providing both known and arcane factoids to me on a regular basis. Anyway, he quoted something I'd said a few weeks before, and I said, "Wait, I told you that last week," and he said, "Yes, you are my favorite political analyst because you know what you are talking about."  And - well, I was surprised because 99% of the time, I know he ignores 99% of my blather about everything.  I mentioned this to a friend, and she said, "Oh, I didn't think you were interested in any of that."

WHY would I have spent four years in college studying Political Science and Philosophy if I found it dull??

2.  I am extremely socially liberal - if the trope that you get more conservative as you age is true, I must have been just ahead of Mussolini in the womb!  That part is maybe not surprising, but people are often surprised to learn that on a personal level - meaning for me and my own self - I am pretty conservative in many ways.  Mostly just about things regarding behaviors - for instance, thinking proper manners are very important and that people should *have* to practice them.  But although my Bridget-centric world follows that belief, I do realize that a lot of people don't find them important at all, and to many, they are trivial in comparison to other things in the world.  However, if someone decided to pass a law REQUIRING people to say Please and Thank You (as an example), I would fight it to the death!

3.  The notion that I am calm and easygoing always amuses me.  Trust me, I am neither, but I know better than to show otherwise in most situations.  I have been mocked and taken advantage of too many times to fall into that trap again, and have also learned that it does no good to cause others panic (or even more panic) when something upsetting happens.  So though I may be able to calmly deal with it or handle the crisis without outward distress, in my head the world is crashing down and I'm freaking out.  Maybe you just don't need to know that.  Plus, I am not easygoing.  I just know how to choose my battles, at least publicly.  My mind contains a whole 'nother life, if you know what I mean.  😇😈

What about you?  Are there things people regularly think/assume about you that are not true, or that surprise you? 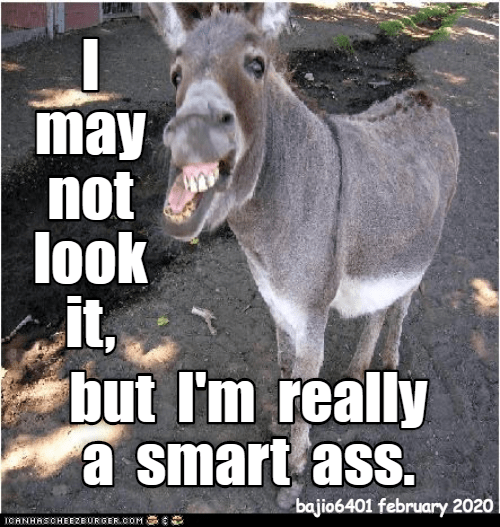 Posted by Bridget at 8:42 AM
Labels: nablopomo-2020, three-on-thursday

Oh, Bridget, we really are twins, separated at birth.

I've become far more liberal as I've aged. And far more politically engaged, even though I've had to DISengage more frequently in the past six months from my steady diet of daily activism to protect my mental health.

And the fact that you used one of my all-time favourite snippets of Walt Whitman...we are destined to get together one day and have an hours-long chat. That particular part of "Song of Myself" never failed to bring me to tears when I read and discussed it in class with my honors-level sophomores. Its meaning is beautiful and vast.

I'll be opening that Whitman collection today. Thank you.

Pet peeve alert - I agree with you on the manners. I am actually really easy going, adaptable to the times, and can accept that things change over time, but manners should never be forgotten!

Actually, Bridget . . . none of that really surprises me about you. XOXO
And I, too, love the poetry of Walt Whitman.

I, like you, am very "Liberal" when it comes to politics. I believe you should be able to worship who you want (though I myself, am an atheist), love who/how many you want (as long as everyone is a consenting adult), I believe women should ALWAYS have a choice over what happens with their uterus, and I believe the government should provide for those who can't provide for themselves (social healthcare, welfare - I'd love to see guaranteed income come to Canada!) I believe immigration makes us stronger, we have a duty to take in refugees, etc.
But, there are two things that I believe in that some would consider VERY conservative:
1) I believe in responsible gun ownership - and not just for hunting. I have a lovely little .22 pistol that is my pride and joy. She only comes out when I'm going to the range, and the only thing she'll ever fire on is paper targets (unless the zombie apocolypse happens... then I'm ready!). Now... that said, I think my sweet American friends' system is too open - no one needs an automatic weapon (but boy-howdy, that must be fun to shoot). I'm all for background checks, limits on magazine capacity, limits on open carry/concealed carry, etc. In Canada, I think we have a pretty decent system - not perfect though, as our government just banned a whole slew of "assault-style" weapons, simply by how some of them look (ie, scary). I've used a few of these, and I can tell you, they are no different than many of the non-scary-looking ones they didn't ban... so that makes no sense to me. But anyway... most people are VERY surprised to find this out about me. I rarely talk about it, except with people who also have an interest in shooting as a sport.
And 2) I don't believe in the tearing down of historical statues/stopping celebrations. Take Columbus for example... yep... he was a total dick, no question. But he also did a lot of cool shit. The good doesn't wipe out the bad, the bad doesn't wipe out the good. I say keep the celebrations... but teach the fullness of history. Teach the good AND the bad. Because if you're looking for a perfect historical figure to celebrate, you're not going to find it. Tearing the statue down doesn't wipe out what happened. Human's are complicated, not perfect. Teach that just because you're not perfect, you can't do great things... and just because you did great things - you're not a god.

People I work with think I'm a stone cold bitch because I'm a woman who speaks her mind! Then I go to lunch with them and they think I'm nice. :-)

I never knew how to really choose my battles until having children. And even then/now it's a struggle.

I love Valerie's term --- liberally complicated. That is me.

Most people assume I am Christian.

Most people assume I am easy going -- there is a reason my favorite mug says:
She is beauty. She is grace. She will punch you in the face.

Manners? Sadly lacking these days. Social responsibility if going to hell in a handbasket as well.

The only person I surprise in this world is me. I am always going ahead with things my brain tells me not to. Sometimes it serves me well. Sometimes it doesn't. At my age I've given up trying to keep score.

Bridget! This is so interesting! and fun


hmmmmmm, people think I make the decisions here. Hahahaha. Fireman is an 8 on the eeanagram scale and control is his comfort.

people don't know that I hung drywall with Fireman in our old house. Carried the stuff , heavy stuff, from our garage in the alley to the kitchen itself.

and
people are shocked when I share that I have depression as a medical issue.

I've become more liberal as I've aged. and I really wish I was easy going but it's a challenge for me.

I have always been very liberal, I just can't see how anyone's brain could think differently? I mean don't you want the greater good for everyone? In one of the very conservative homes I go to the medical foster mom assumed I was ultra conservative because I am a strict Mom, really? Being a strict mom and setting a good example for your children is called parenting. Also being concerned about the environment, all peoples rights, equality, the need for affordable health care should be important to everyone.