The title of this post tells the story.  My latest knitting project is not nearly as far as you'd think it might be, based on when I started working on it, and the fact that once the initial part is done, it's just a whole bunch of stockinette.

My current project is the Musselburgh hat, which is something that apparently everyone but myself and about twelve other people in the world have made.  I wanted to make one for my niece's husband for a Christmas gift, because I thought it was a good choice for someone with a bald head who spends lots of time outdoors.  I also decided to make it with two different colors, since it is a reversible design.

So I got my supplies together and sat down to watch a tutorial about the pinhole cast-on.  I followed that and ... it didn't work.  After about five tries in an evening, and then four more the next evening, I had something that kinda/sorta resembled what it should be, and knit for a bit.  But after knitting some more, I decided it just looked bad.  So I decided to try again with the other color and see if that worked better.  So I ripped out what I had, and started again with the other color, and after a few tries and a few more episodes of unravelling, it finally worked.  Well, it worked a lot better, I'll say.  However, now I've put it in a brief time out because of my overall annoyance at how frustrating it all was to start.  I have no additional photos at all to show you, you'll just have to take my word for it.

To use one of my mother's favorite sayings, "Oh for God's sake!"

I did recently finish two cozy mysteries of varying interest, so I have been reading even if not anything overly involved.  On my way home from work tonight, I'm stopping at the public library to pick up one of the holds that has arrived for an actual physical book. 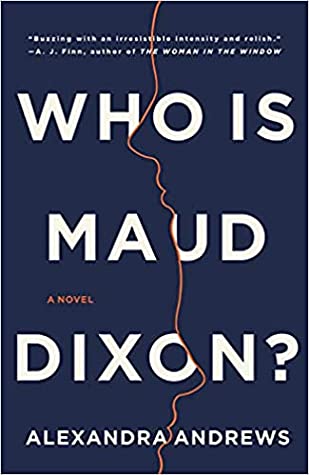 Hopefully this will be a good read.  If not, at least I didn't purchase it, I can just return it to the library earlier than it is due, and the next person can try it.
You'll just have to tune in later to see if I read the book and/or if I make amends with the hat.  Until then, it's just one of life's mysteries, you know??  😉
Posted by Bridget at 11:59 AM
Labels: Unraveled-Wednesdays

I am not a knitter so I can't help you with the hat!
I am a reader, tho, and just finished a fun book, The Thursday Mystery Club. I enjoyed it! Now I am reading West with Giraffes and cannot put it down. Both were books I had placed on hold at my library after I saw them mentioned on blogs.
Good luck with your knitting!

I've seen that Maud Dixon book - looks interesting. The pinhole cast on - is that starting with a very small number of stitches and increasing? I had to do that with the French Market Bag and it was difficult - someone called it a bellybutton!!

I got a headache just reading what you went through with that cast on. I'm at the old dog no new tricks stage of my life. My brain has enough just dealing with what I already know.

If I could get someone else to do the casting on and the first row of all my knitting, I'd be happier. Especially on circs.

Kudos to you for sticking with it.

I’m knitting that hat pattern too. It took me a try or two to get the cast on right, but I like how it is done. It’s easier than some other methods of doing this.