Yeah, I know that is not an actual word, but it's how things are right now around here.

I really wanted to knit some gifts for people for Christmas, but I don't know that I'll do it - it's kinda late in the game by now, and most of them need to be mailed.  So perhaps the best plan is to start when I can, and plan for next year.  I'm thinking ...

I've been concentrating on a couple of things - one has been long term, while the other was something I wanted to make for The Tim for Christmas. 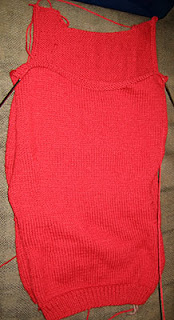 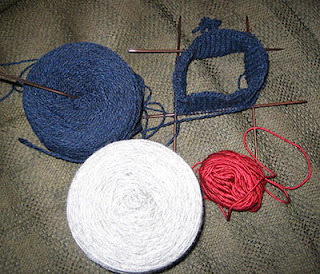 On the top is the finished back and nearly completed front of a sweater I have been making using one of Amy Herzog's Custom Fit patterns.  I started this sweater a little more than a year ago, at a class at Loop.  I love the color of the yarn, and I really want to finish it, but it has been on a long hiatus.  First, because of my sore elbow, and secondly, because I'm just afraid I would finish it and it wouldn't fit, which is most likely not the case, but you know how it is when your brain decides something.

The photo below that one is the very beginning of a pair of socks I'm hoping to make for The Tim for Christmas.  I have had such a problem getting these going, but think I finally found the right needles to use, and finally got some rounds of the cuff knit.

Then, the inevitable occurred - I felt like I was doing really well on both of these projects.  That kind of "I'm really proud of myself" moment often comes back to bite me in the posterior.

As I prepared to start working on the last part of the sweater - the shoulders and neck - I realized I had too many stitches!   Apparently, I didn't decrease as many times as I should have earlier in the pattern.  I have decided I'm not tearing back *all* the way, but half of all the way.  An arbitrary decision, but seriously it's only four stitches, so I'm gonna live dangerously.  I've told myself it will be OK.  Right? RIGHT?

So then I thought, well, let me work on the socks a bit.  At which time it occurred to me that I had started the socks using the navy yarn.  I was supposed to start with the gray yarn (which looks white in the photo).  At first I thought I'd just go ahead, but then I realized I wouldn't have enough for a pair if I continued with the navy.  Time to start over with the gray ...

At least I only had a little bit already knitted.

Granted, neither of these things are the worst that could happen.  But you know how it is - you just get annoyed.

Just one of the many reasons I'm glad there is wine.

Some days, it's hardly worth opening the knitting bag, huh?

All of your readers are nodding in sympathy as we've all been there. Wine does make it better!

The knitting faeries are like that, just when you think you have things under control they zap you into reality.
Hugs,
Meredith

I had planned on knitting something for my sister. But just never got it done. So the cowl I made for me - I'm giving to her! She is taller than me and this cowl is really long (could probably be tripled around the neck) - so it will work better on her anyway - and it is in one of her favorite colors....

Ah. Knitting. Always keeping one humble. . . :-)
(No Christmas knitting for me this year. And I'm good with it!)

Ouch. Been there many times and it does feel pretty terrible. Nothing is worse than a knitting deadline or too high expectations from the recipient. I am pretty much in the same place with Son's cardigan. I know it's going to be awful but I just keep going.