So Here's the Question

Will NaBloPoMo work better for me than Slow Fashion October?

And so we begin.  Welcome to my attempts to post something every single day during the month of November.  After posting suggestions for topics last week, I decided that I was gonna give it a try.  The worst that can happen is that I don't do it, and it's not like I'm gonna get arrested or anything if that happens.  (Well, at least that's my understanding ...)

Also, I'm only participating on this blog.  I'm not so crazy as to try it with both of them!

Anyway, I had grand plans for Slow Fashion October.  I was going to finish something that was in progress, and also knit one small thing - I had planned on knitting a hat.  Well, in an unusual occurrence, I got back to a couple of my WIPs, and worked only on two of them for the month.  I didn't finish either one, but I made a lot of progress.  So although my official goals didn't get accomplished, I did make headway during the month of October.  And I did it slowly.  Does that count?  (not really)

Anyhoo, onward and upward and all that.

Happy November!  It's a busy month for us, with birthdays, holidays, and one of the best holidays in the universe - Thanksgiving!  But before we go too deeply into November, let me fill you in on something from October that I never got to post about - the Mutt Strut.

As usual, there were some Mummers to get things going: 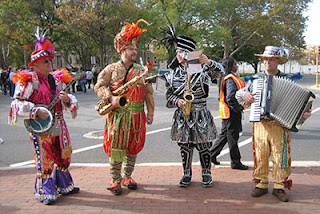 I always tell The Tim that you can be sure that Dug is a Philadelphia doggie - he LOVES the Mummers, and doesn't want to walk away from them to start the Strut ...

Unlike last year, which was rainy and damp, this year's weather was just a perfect fall day - cool, sunny, and a little bit breezy.  Dug had two "costumes" for the day.  He started out as a kitty cat: 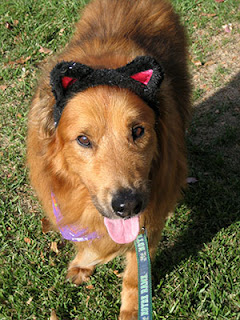 Which, as you can see, made him quite pleased about the whole thing.

As usual, the other costumes were much more elaborate. 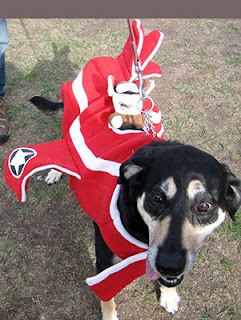 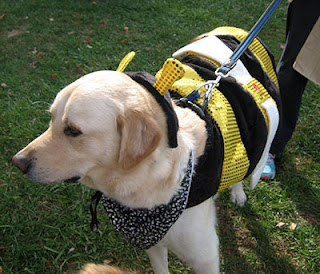 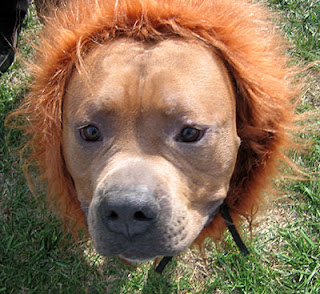 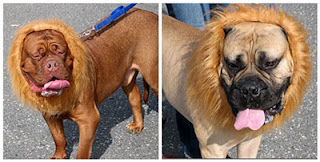 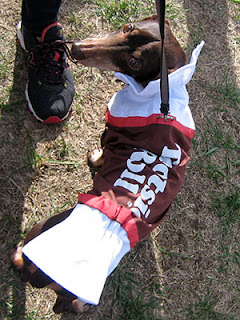 My favorite was this Newfoundland, dressed as Harry Potter, complete with lightning-shaped scar: 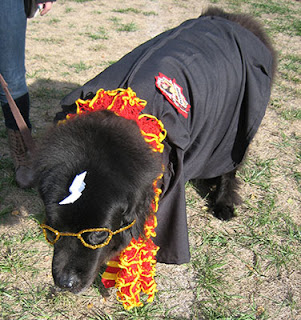 The event is held at the Philadelphia Navy Yard, which is no longer active for the U.S. Navy, but has been redeveloped to be a business/retail/restaurant park, with reuse of older buildings and some new ones added.  There is a shipbuilding company there, and usually a couple of ships in dock that are either docked there for a break, or because they are in the process of being worked on.  I always forget how absolutely huge some of them are. 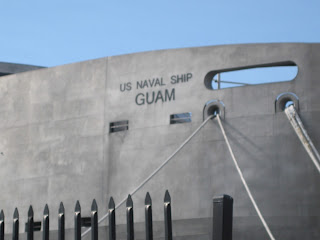 And in a shocking development that was not reported on by the local media, a PIRATE (albeit a friendly one) was spotted at the Navy Yard! 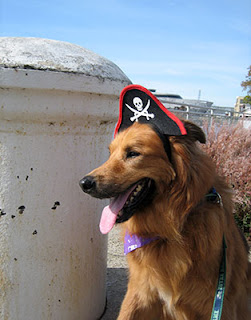 Dug was also happy to be reunited with Spud, another pup who was a foster dog with the same friend at the same time he was: 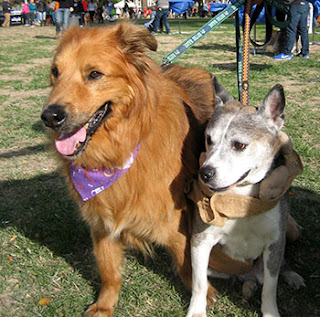 You can't really tell from this picture, but Spud is wearing a costume that is a sack of potatoes!

It was really a fun day, with so many cute and creative costumes, and so many cute doggies!  The very best part is that it was also a record-setting day, both with the number of registrants, and the amount of money raised!  Dug and I were thrilled to contribute, and were lucky enough to have gone past our fundraising goal, which was one of the best things to happen this year to us.

I want to say thank you to those of you who so generously donated to our fundraising.  I will formally thank you by snail mail, but please know that your contributions were truly appreciated, and you helped set that record for amount of money raised.

I marvel at the amazing costumes for pets these days. I could have spent hours in Petsmart trying them on Pup if she had been willing. Dug was an adorable kitty and a very dashing pirate!

Hello Bridget!
I love this post!
The Mutt Strut was fabulous! Just my kind of thing :-)))
My favorite picture is the one of the reunion of 2 good friends, Dug & Spud... they never forget, do they?
Happy November - you're off to a great start!
Danette

Let's go NaBloPoMo!! lots of photos, especially cute dogs...in costumes... is a sure way to win!

Those are some very creative costumes; I love Dug the Pirate! And Mummers in October? I thought they were only allowed out on New Year's Day!

What a FUN event! I just love the costumes. Such dog joy. :-)
Good luck with NaMoBloPo. Just remember . . . no pressure; just fun. XO

Those puppies were adorable!! You could have saved a few and scattered them around when you had a slow blog post day!! I am doing NaBloPoMo as well and plan on having my kitties save me more than once!!

We sound so fresh know, lets hope we keep going by the 17th!!

Glad the Mutt Strut worked so well. Love the pitties with the lion's manes. TOO CUTE!

And we're three days in! (And I'm caught up!) Here's to pressure free blogging!